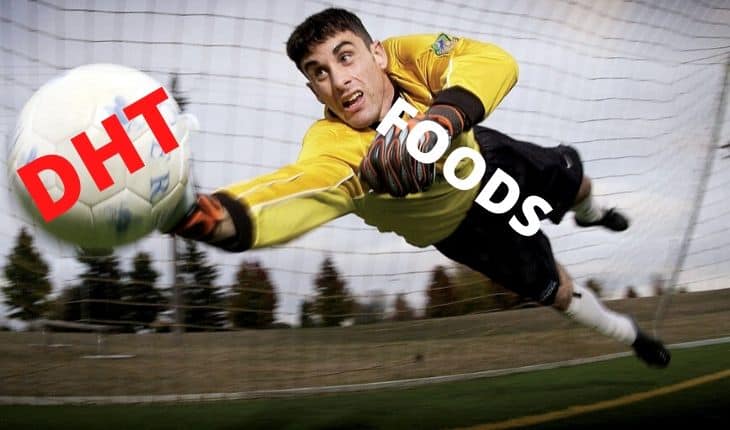 If you are looking for natural solutions for androgenic alopecia and hair loss, then you should definitely check out these DHT blocking foods.

We have done the research and found the best foods that are nutrient-packed to supercharge your health. These power foods contain vitamins and naturally occurring compounds that help stop the production of chemicals that may be triggering your hair loss. And they may even trigger new hair development so you can have a full head of hair again.

As we explored in our previous article, changing the way you eat is just one possible way to reverse hair loss, but it is a great place to start.

Dihydrotestosterone, or DHT, is a hormone that is derived from testosterone.

Eventually, this starves the healthy hair of nutrients, which causes it to fall out and leads to male pattern baldness. This is common in both men and women. 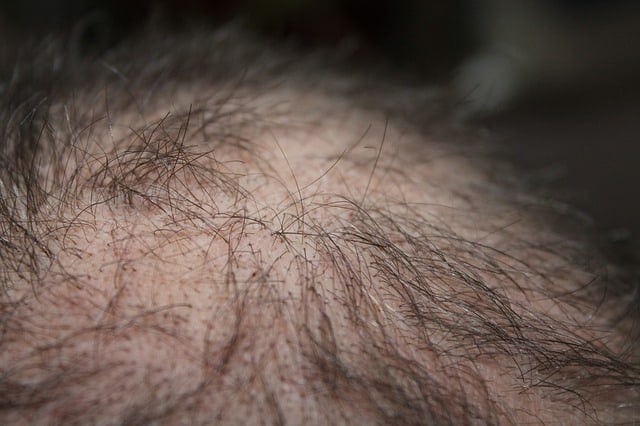 There are a few main reasons why we prefer natural methods to the chemical concoctions. The main FDA-approved DHT blockers are Finasteride and Minoxidil.

Primarily, the main issue with these two choices is that they come with a lot of potential side effects.

According to the Mayo Clinic, Finasteride works by inhibiting 5-AR. Some of the more common problems with Finasteride include impotence, confusion, dizziness, and a loss of sexual desire.(1)

Next, Minoxidil is a vasodilator. That means that it helps to increase blood flow to the scalp by widening vessels, but again there are potential side effects. Although they are less severe then Finasteride, they include possible hair loss, burning of the scalp, and difficulty breathing.

On the contrary, by adding these specific DHT blocker food to your diet, you will avoid these harsh side effects. Also, many of these have essential nutrients that will improve your health in other ways.

By adding some of these foods to your diet, you may be able to lower the amount of DHT that is in your body. Most of these work by inhibiting 5-AR since it is the catalyst for converting testosterone into DHT.  By eliminating 5AR, we can stop the production of DHT and possibly prevent hair loss.

You can eat many of these items in their natural state, but others are best when taken in supplement form. Also, many of these DHT blockers are used topically. Because of this, they are found in many of the best hair growth serums and as ingredients in natural hair loss shampoos. You can read our reviews and ratings of the top organic hair loss shampoos on this page.

In a study that looked at the impact of 19 medicinal and edible mushrooms on the ability to inhibit 5AR, Reishi came out on top. (1) In other words, it blocks DHT naturally.

Ganoderma Lucidum, better known as red reishi mushroom, is a bitter mushroom with a variety of health benefits. Out of all the species that they tested, Reishi was able to lower 5-AR the most. By reducing 5-AR, you can prevent the conversion of testosterone into DHT, which could stop male pattern baldness.

The best way to prepare reishi is by making it into a tea and drinking it. 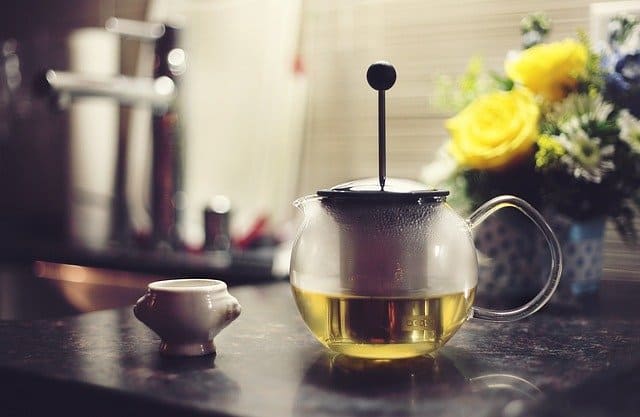 By now, everyone knows that it has a ton of health benefits. From fat loss to improved brain health and even anti-cancer properties, it seems to do it all.

But did you know that it could also help block DHT production in the body by inhibiting 5-AR?

The reasons behind all these benefits are the same. Antioxidants.

One class of polyphenol antioxidants that are particularly important are called catechins, which contribute to the bitterness of the tea.

The specific catechin, epigallocatechin gallate (EGCG), has been linked to suppression of 5-AR, which helps to reduce DHT levels in the blood. That is excellent news for hair loss and prostate issues as well!(2)

In 2014, researchers conducted a study on 76 men with androgenic alopecia to observe what happens with supplementation with PSO on hair loss.

Researchers gave the patients in the intervention group 400mg of PSO daily. After 24 weeks, they observed excellent results compared to the control group.

Many of the men self-reported that they were happier with their hair loss and thought it was growing back. And after researchers compared the before and after photographs, they realized that they were correct.

After 24 weeks, the average hair count of the group treated with PSO increased by 40%!(3) In other words, they had new hair growing on their head.

You can also eat whole pumpkin seeds or apply PSO directly to the scalp if desired to get your healthy hair back. 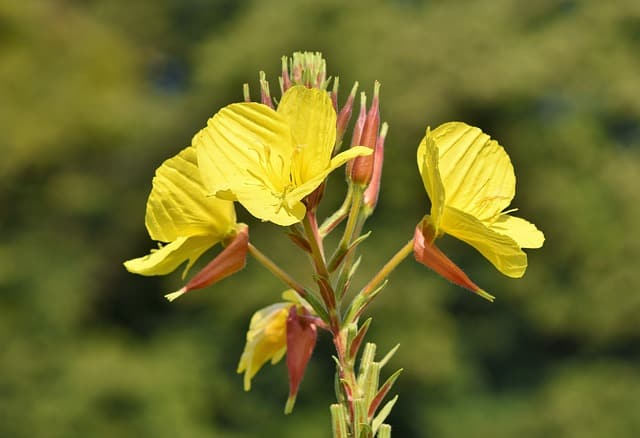 Gamma-Linoleic acid is an unsaturated fatty acid that is especially good at inhibiting 5-AR. And you guessed it, evening primrose is one of the highest sources of these fatty acids.

Evening primrose is a flowering plant that is native to eastern and central North America and was used by the Native Americans as a herbal remedy for swelling. In more recent times, it gained popularity as a medicine in the 18th century.

Although the plant can be eaten in raw form, it is more commonly found in most health food stores in capsule form as evening primrose oil.

Other sources of Gamma-Linoleic acid are borage seeds, hemp, and spirulina.

Pygeum bark grows on the Pygeum Africanum tree, and people often use it as a treatment for benign prostatic hyperplasia (BHP) stage I – II.

Taking a pygeum extract inhibited two of the most important enzymes involved in
BPH, 5-AR and aromatase. It appears that this is the result of beta-sitosterol, which is a powerful phytosterol.

“It was demonstrated in vitro that an extract of Prunus
africana showed an inhibition of 5-α-reductase
with an ED50 calculated as 0.78 mg/ml.
Also aromatase was inhibited at an ED50
calculated as 0.98 mg/ml. Both effects are
concentration dependent.”(4)

Although you can eat the berries of the saw palmetto plant, you probably do not want to. People often describe the taste like a mixture of blue cheese with tobacco.

This palm grows in the Southeastern United States and produces orange berries, which turn black when ripe. The berries are often turned into a tincture or extract when used for medicinal purposes.

Similar to pygeum, saw palmetto contains phytosterols which act as a natural DHT stopper in the hair follicles and scalp to eliminate male pattern baldness. It has even been turned into a pharmaceutical product called Permixon that is approved for use in Europe but does not have FDA approval for use in the USA.

Finally, saw palmetto is an ingredient that that is often in hair growth supplements that can help stimulate the hair follicles and scalp. 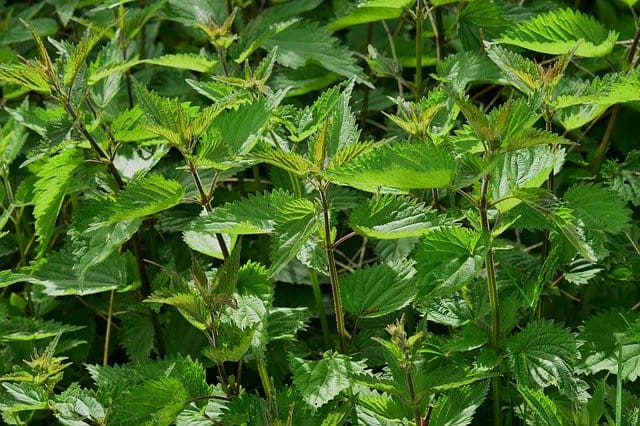 Stinging nettle is another fantastic choice that blocks DHT to add to your regimen. Urtica dioica, is a flowering plant with stinging hairs on the leaves and stems. These stingers act like little hypodermic needles and shoot histamine and other chemicals into your skin, which cause painful and irritating rashes.

Although this plant can be a pain when touched, people have been using it as a medicine for a long time.

Since it contains phytosterols and lignans, it is an excellent supplement that inhibits DHT naturally in the body. And alongside saw palmetto, it is one of the most used herbal remedies for prostate health.

To easily add stinging nettle to your meals, you can find supplements in cream, extract, and capsule form.

Coconut oil is great for hair because is high in medium-chain triglycerides, which, when consumed, can help reduce 5AR and help lower high levels of DHT. In addition, it is anti-fungal, anti-bacterial, and can help with blood circulation.

Also, you can use coconut oils as a topical remedy. By applying it to your head, it is helpful for nourishing and conditioning the hair follicles and the scalp. Because it is high in lauric acid and antioxidants, it helps to provide nutrients to the hair and prevent breakage, which helps new hair grow on your head. 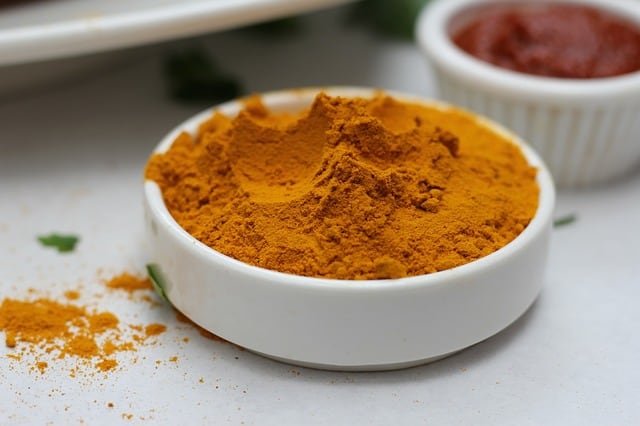 That little orange healing root is back again!

Turmeric contains a large number of polyphenols, most notably, curcumin. In a study using a hot water extract of turmeric, scientists were able to inhibit 5-AR by 80% and stop DHT production.

Supplementing with turmeric was even comparable to the results of using Finasteride in other studies.(5)

To get the maximum benefits of turmeric, make sure that you mix it with black pepper and a healthy fat.. If you haven’t tried this super-food, what are you waiting for?

As we learned in our previous article, flax seeds are a fantastic food source of Omega-3 essential fatty acids. That is because they are rich in Alpha-linolenic acid(ALA).

Research has shown that ALA inhibits the production of 5-AR. But that is not the only compound in flaxseeds that is great for blocking DHT. They also contain something called lignans. Lignans have also shown promise in various studies to help stop DHT formation.(6) 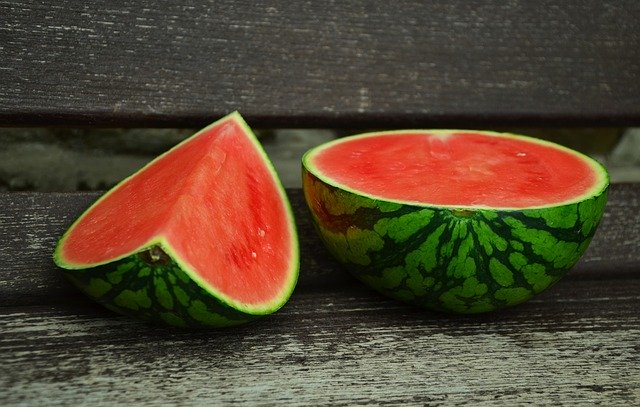 Watermelon can potentially play a role in helping lower high levels of DHT in the body and help regrow hair.

First off, watermelon is rich in lycopene, which can inhibit 5AR. Secondly, it contains L-citrulline, which is an amino acid that converts to nitric oxide and helps with blood flow. Both of these are crucial to reducing DHT!

Other plants that are high in lycopene include tomatoes and mangoes.

One of these reasons that pumpkin seeds are effective is because they contain zinc. Not only is zinc able to inhibit 5-AR, but it is also one of the top hair growth vitamins that we went covered in this article.

Pine nuts are also very high in zinc which makes them natural DHT blockers that you can add to your day. Another important fact is that vegetable sources of zinc contain phytosterols, which help reduce 5-AR.

Try including pine nuts in salads for some extra crunch!

Also, other foods that are high in zinc are kale, spinach, white mushrooms, and oysters. Also, mushrooms and spinach contain biotin, which is also a great nutrient for hair. Since many are deficient in zinc, it is wise to eat some of these choices.

Although most of the studies done on rosemary and hair loss have been from topical applications, it might be worth adding this herb to your day as well.

Various studies have shown that in mice and humans, rosemary essential oil can regrow hair as effectively as Minoxidil.

By adding some of these nutritious foods that block DHT into your life, it is possible that you can stop your hair loss and even regrow some hair.

Although pharmaceutical brands can help lower DHT in the body, we believe that it is safer to try to find a natural solution to hair loss. By locating specific nutrient deficiencies within your body, you will maintain improved overall health and may even end up with a full head of hair.

My passion for health and wellness started in 2009. My personal mission is to help inspire and guide people on their health journey. I am currently a NASM certified nutrition coach.